Changi Airport has embarked on a massive five-phase project to rename its taxiways as part of preparation works for Changi East and airport expansion which includes a third runway. This is the first time that Changi is renaming its taxiways airport-wide, since opening 38 years ago.

When the decision was made in 1981 to move Singapore's main airport to Changi from Paya Lebar, consultants developing the original airport masterplan designed a taxiway naming scheme to serve the existing Changi Airport airfield, which is the area between the two runways.

Over the years, passenger flow at Changi Airport has increased from 8 million in 1981 to over 65 million in 2018 and aircraft movements have grown tremendously to more than 386,000 in the same year, with a flight taking off or landing every 80 seconds.

As Changi Airport continues to grow, the master planning for the airport’s next phase of growth has also started. In the next few years, many more taxiways will be built to connect the third runway and its extensive network of taxiways to the existing Changi Airport site. Changi Airport Group’s (CAG) Master Planning team studied the need to review the existing taxiway naming scheme for three main reasons – to help pilots navigate the complex Changi airfield when taxiing, for clearer communication between the Air Traffic Control tower and pilots, and to develop a taxiway naming scheme that will accommodate Changi’s future growth, in line with the latest International Civil Aviation Organisation recommendations. This project is also planned to coincide with replacing the bulk of the taxiway guidance signs which are nearing their end-of-use lifespan.

As the main users of the taxiways, the Civil Aviation Authority of Singapore (CAAS), pilots and ground handlers were consulted throughout the development of the new naming scheme, which is designed to be simple, consistent and sequential. With the new naming scheme, letters ‘A’ to ‘L’ will be reserved for new taxiways to be built for Changi East, while letters ‘N’ to ‘Z’ will be used for taxiways within the existing Changi Airport site.

With approximately a thousand taxiway guidance signs to change, the task to rename taxiways, led by the CAG Development Projects team, are to be carried in phases over the next few years. For the first phase which took place during the wee hours on the morning of 5 July 2019, existing taxiways with prefix ‘A’ and ‘B’ were renamed, an operation involving about 95 signs over 72 locations. This transition was planned to coincide with a regular runway maintenance closure to minimise the disruption to flights and impact to airside users.

As part of a closely coordinated effort, work teams were dispatched across four zones to carry out the sign replacement operation. The aim was to keep the replacement period, which required closures of affected taxiway zones, as short as possible to avoid confusing pilots. Once the Air Traffic control tower gave the clearance to close the affected taxiways, like clockwork the first team proceeded to set-up marker boards to demarcate the closed work area while other teams followed to start changing the taxiway signs systematically and expeditiously. 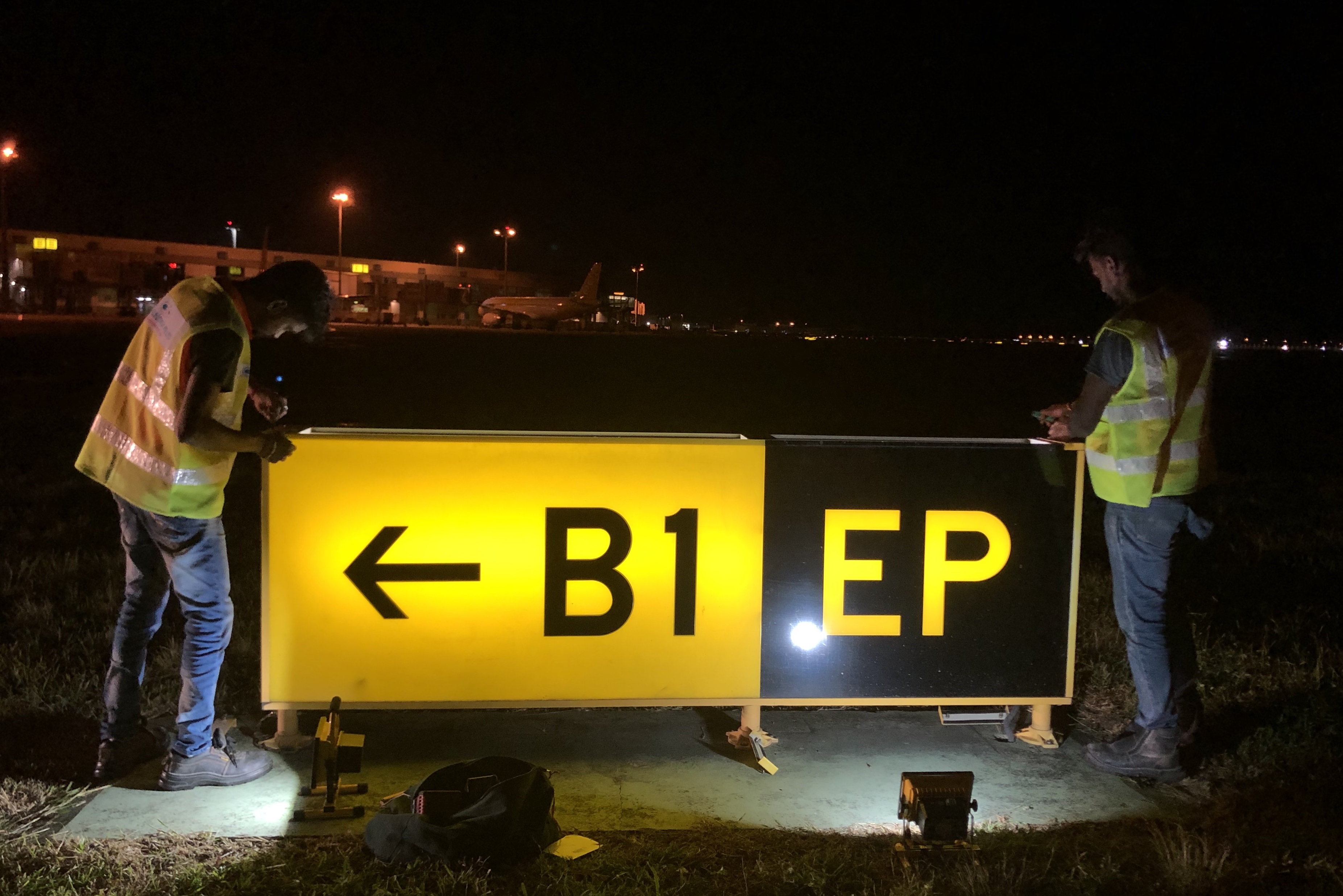 Working in the wee hours of the morning during off-peak period, the inscription panel of affected taxiway signs are lifted and replaced with a new pre-prepared inscription panel with the new taxiway name. With several rehearsals conducted beforehand, on average, it takes as little as ten minutes for the entire sign-changing process to be completed.

For the first phase of works completed on 5 July 2019, taxiways with prefix ‘A’ and ‘B’ were renamed

The entire operation took less than four hours and the closed taxiways were successfully reopened ahead of schedule the next morning, with little impact to flights and airside users.

Preparations for this phase started over a year ago by a team jointly led by CAG’s Master Planning & Development, Airside Operations and CAAS Air Traffic Services. Advanced notice was sent to the local and international aviation community including pilots and airlines, to notify them of the renaming of taxiways at Changi three months before the actual operation. To ensure a smooth transition, pre-training was conducted for the air traffic controllers, pilots, the Airport Emergency Service and airside community such as ground handlers, towing crew and airside drivers. Two rounds of night rehearsals were also conducted across agencies to ensure the various stakeholders were well-prepared for their roles and responsibilities and familiar with the night working conditions. 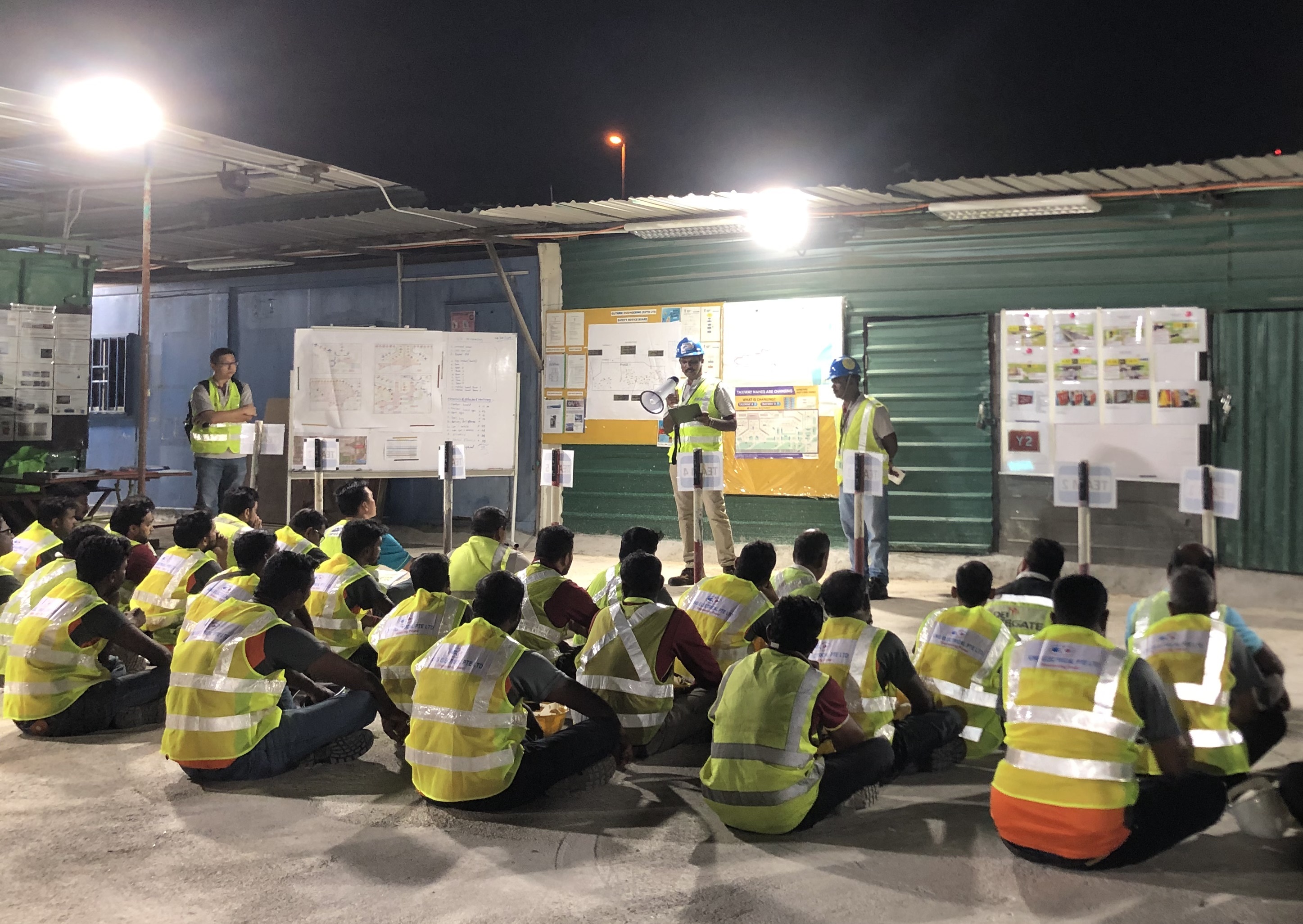 Before the night activities, a safety briefing is conducted to remind staff and all workers on the safety procedures and things to note when in the taxiway area

The next phase is scheduled to take place in the first quarter of 2020, with about 170 taxiway guidance signs to be changed overnight with the closure of affected taxiway zones. Subsequently, there would be another three phases of such works to be smoothly coordinated and safely executed. As Changi Airport continues to prepare for the next phase of its growth, the new taxiway naming scheme will cater for expansions to the Changi airfield for many more years to come.

A decade of transformation

Seamless and ‘smart’ shopping gets an upgrade at Changi

Marching on as ONE Changi

As Singapore commemorates its bicentennial this year, the National Day Parade (NDP) marching contingent from Changi Airport is set to wow the audience in more ways than one. Read on to learn about the ONE Changi contingent marching at this year’s NDP.