The awards to honour outstanding airport staff who had exemplified our safety culture were given based on three broad categories -- Innovation & System Thinking, Safety Awareness & Courageous Act, and Safety Promotion & Culture Building. Separate awards were also given for team and individual efforts. A total of 14 awards were presented to eight teams and six individuals. We take this opportunity to highlight some of them below.

Awarded for Innovation and System Thinking – Team from SATS

Traditionally, the standard way for Ground Handling Agents (GHAs) to access the cargo doors of wide-body aircraft is to use a Joint Container Pallet Loader (JCPL). Manoeuvring the JCPL near to the aircraft poses a small amount of danger, as any miscalculation might scratch or even cause damage to the aircraft.

To make it safer to access the doors of wide-body aircraft, SATS started to explore designing a platform ramp ladder which is easier to position and control than the traditional JCPL. A multi-disciplinary team was put together and after numerous trials, finally created a Universal Platform Ramp Ladder design which can be adjusted to access the doors of all types of wide-body aircraft and is sufficiently lightweight for manual deployment by one man. It also incorporates an auto-brake system which prevents accidental movement, making it safer than the JCPL.

Traditional way that GHAs use to access aircraft doors, using the JCPL. 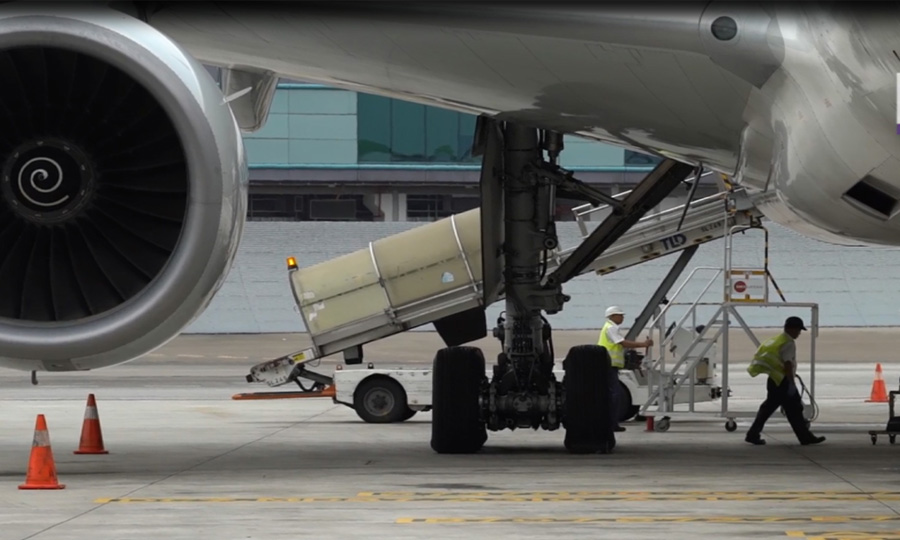 With this Universal Platform Ramp Ladder, the team effectively helped to minimise the risk of aircraft damage due to accidental contact with the JCPL. In addition, SATS also came up with a safer way to load, unload and transport ramp ladders, which was previously done with forklifts.

One early morning in June last year, Jumat from SIA Engineering Company (SIAEC) was performing towing operations when he realised that the undercarriage of the airtug he was operating had caught fire.

Thinking quickly, Jumat immediately disconnected his vehicle from the aircraft and positioned it at a safe distance, before proceeding to extinguish the fire swiftly with extinguishers available in his airtug. His vigilance and quick response helped to stop the escalation of the fire and kept damage to a minimum, before the Airport Emergency Service crew arrived on scene. When asked what went through his mind throughout the incident, Jumat replied, “I wanted to extinguish the fire as soon as possible, to avoid any damage to the customer’s aircraft. As I have been trained to use a fire extinguisher, once I found the source of fire, I put it out as soon as I could.”

What goes into preparing for T4 Open House

To give the public a sneak peak of Changi Airport’s newest terminal, Terminal 4 (T4), its Open House is currently being held over a two-week period from 7 to 20 Aug.  All 200,000 Open House tickets have been taken up, translating to an average of more than 10,000 visitors expected daily.

To cater to the large number of visitors, Changi Airport Group (CAG) staff started planning for the Open House towards the end of last year.  Here’s a look at some of the action that went into the preparations for the event.

Music to the Ears

Have you ever noticed the different types of background music playing across Changi Airport throughout the day? Curious how Changi Airport curates its soothing playlist of melodious tunes?

Changi Airport’s ‘playlist’ is made up of a selection of instrumental pieces from international artists and familiar classics. These include “In a sentimental mood”, “Fly me to the moon”, and “Somewhere over the rainbow”.

The music passengers and visitors enjoy are from a list of some 500 tracks. This playlist is specifically designed to match the peak and off-peak hours for each terminal, both in the public and transit areas, and is constantly evolving based on feedback and the events along the year. For instance, during festivities like National Day and Deepavali, the playlist will be changed to include music pieces that fit the occasion.

A Gastronomic Guide to Changi Airport

It’s no wonder that world renowned chef Anthony Bourdain raves about the great food at Changi Airport, where you are never more than a few minutes away from a plethora of dining destinations. Whether you are a traveller looking to fill your tummy before taking off, or just want to enjoy a hearty family dinner, Changi Airport offers an ever-expanding range of restaurants, eateries and cafes in both the transit and public areas to indulge any culinary craving.

To help navigate the gastronomical experience, read on to find out.