Bringing the vision to life 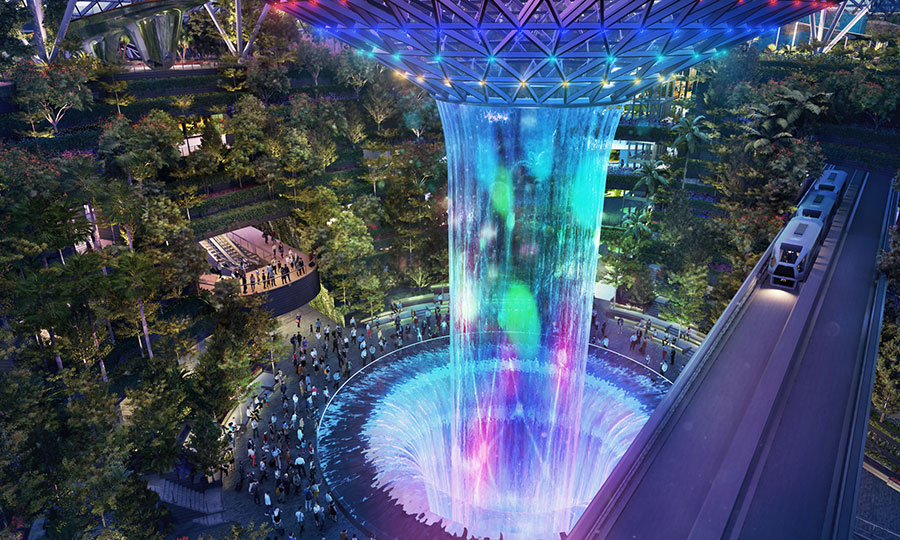 How was the Canopy Park for Jewel Changi Airport (Jewel) with its many exciting attractions conceptualised?

The vision that guided it was to create an area that is not only relaxing because of the lush greenery around, but also invokes play in the young and young-at-heart.

Q:  How did the Jewel team arrive at the concept for a Canopy Park for Jewel Changi Airport?

This was a team effort that took many months (and years) of dreaming.  In fact, we have been dreaming about Canopy Park since we broke ground for Jewel in 2014!  There were various working plans but we were never quite satisfied and continued to scour the world for what we felt would truly raise Changi Airport’s status on the world’s stage.

For Canopy Park, we envisaged a green natural environment that would fit the overall ambience of what we were trying to create within Jewel.  Bringing the outdoors indoors ensured that Jewel could be enjoyed under all weather conditions so that no visitor would be disappointed when they came to visit.

Q:  How were the attractions chosen?  What were the main considerations you had?

Jewel does not have the space of a theme park.  After much research, it was apparent to us that the best attractions in the world are those set in natural environments, and encompass the universal and timeless elements of play, like running, climbing, sliding, hiding, and exploring.  Such elements will last through the tide of time and can be enjoyed by all ages.  What is special for us is also that we are designing structures that have never been done before in an environment like Jewel.

We also established that each attraction needs to have sufficient scale, given the size of Jewel and the throughput we would be getting.

Q.  Of the various attractions, which is the most challenging to design/construct and why?

Given Jewel’s unique architecture, where the attractions will be built at the topmost level of the building, construction will always be a challenge. These attractions are typically done in outdoor environments but here we’re doing it indoors, and on a large scale.

Adding to the complexity, we also have to consider the weight of the construction materials and the unique garden environment at Canopy Park when constructing the attractions.

Because Jewel also does not have a regular concrete roof, but a glass façade, most of the structures can’t be hung from the ceiling.  That also provides us with an immense challenge.

Q.   Which attraction is your personal favourite and why?

To me, it’s hard to choose a specific one.  It’s really the combination of them all that’s magical.  And there are actually more than just the three main attractions mentioned.  We were greedy and optimised every nook and cranny on Jewel’s Level 5.

There’s the Canopy Bridge that has never been done in an indoor environment - that will be the spot to watch the daily light and sound show!  We even thought of the toddlers who will be visiting Jewel and created “Foggy Bowls” – insets in the ground which produce mists - to give the little ones a taste of the wonders of nature filled with fun and laughter.

All these attractions encompass the timeless elements of play such as running, climbing, sliding, and exploring. I believe many Singaporeans grew up with childhood memories of running and climbing about on traditional playgrounds.  We’re very excited to be able to introduce these elements on a much larger scale at Jewel with unique elements that (we hope) will never be found in another playground or theme park.

Come 2019, travellers and local residents will have plenty more to look forward to with the opening of Jewel Changi Airport (Jewel), a 10-storey lifestyle destination located in the heart of Changi Airport. Nestled at the topmost level (Level 5) is Canopy Park, a 14,000 square-metre world-class attraction, featuring unique offerings such as play attractions, gardens, walking trails and dining outlets in air-conditioned comfort.

Travel habits continue to evolve and holidaymakers are increasingly exploring more than one destination on their journeys. Such changing trends also mean that travellers are now more open to getting from point to point by a variety of ways – be it by plane, ferry, bus or even train!

In the Singapore context, many visiting tourists might choose to pair Singapore with other nearby locations – such as the islands of Batam and Bintan in the nearby Riau islands, or with various cities in South of Malaysia as part of their travel plans.

Ever wondered what life is like as a Duty Terminal Manager (DTM) in Changi Airport, to ensure the smooth operations of the terminals every day? Changi Journeys speaks to DTM Cindy Tay, to find out more.

Cindy has been working at Changi Airport for the past 13 months. She enjoys her current role very much as she has always known that she does not want is a desk-bound job.

A typical day in the life of a DTM sees Cindy starting her shift with a ground walk in the terminal that she has been assigned to for the day.