Climate change has brought about extreme weather conditions across the world, and Singapore has not been spared from this impact. In particular, flash floods have become increasingly prevalent in recent years. To ensure that Changi Airport’s infrastructure is climate-resilient, so that Singapore’s air connectivity is not affected, Changi Airport Group (CAG) has put in place initiatives such as building the airport on higher ground above the mean sea level, as well as increasing the capacity of the airports’ drains.

In addition to the above, CAG has added another layer of defence against flash floods - sensors to monitor the conditions in our drains, so that we can prevent floods along Airport Boulevard and within the airfield. Debris in drains is a common occurrence. With the Northeast monsoon season approaching, it is important for CAG to be able to monitor the conditions of its drains 24/7 online, so that it can activate remedy actions immediately when required.

To this end, CAG’s Engineering and Development team has installed seven sensors at strategic locations across the airport’s drain network, with four more to be added by February 2022. These sensors are able to track the rate that water is building up in the drains and the south detention pond in real-time. In the event of any anomalies, for example where there is debris or chokage, the team is able to deploy resources on ground quickly, to mitigate the possibility of floods.

This additional layer of defence had successfully helped Changi to prevent a potential case of flooding back in early September 2021, after a bout of extremely heavy rain. The sensors triggered an alarm, which alerted CAG’s Engineering team to rising water level in the outlet drain serving the south detention pond, even though the rain has stopped. Workers were quickly deployed to that drain to remove debris (such as dried leaves) from the security grilles, effectively resolving the situation.

In addition to real-time camera footage, data collected by the sensors can also be viewed on a dashboard, allowing the Engineering team to analyse the data and predict trends going forward.

To facilitate easy reading of data with more sensors being installed in future, the Engineering team challenged themselves to design an interface where they can tell at one glance the drains which require immediate attention. Drawing inspiration from Google maps, which use colour schemes to reflect road congestion situations, the team decided to build CAG’s very own “Google drains” map, to show water levels in the airport’s drains in real time. 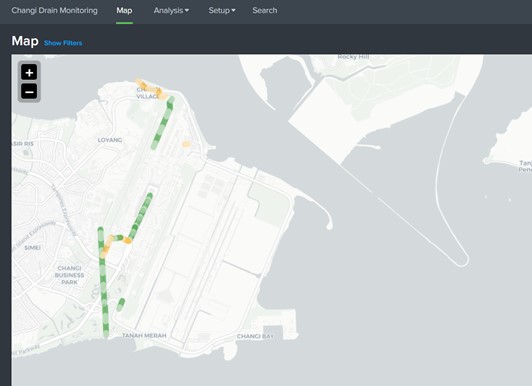 Work in progress - “Google drains” map for Changi Airport. The team is working to add more drains to this map progressively.

While this interface is still work in progress at the moment, when completed, this “Google drains” map will enable CAG’s Engineering team to easily monitor the condition of the airport’s drain network in real time, 24/7, effectively reducing the chances of a flash flood at the airport. 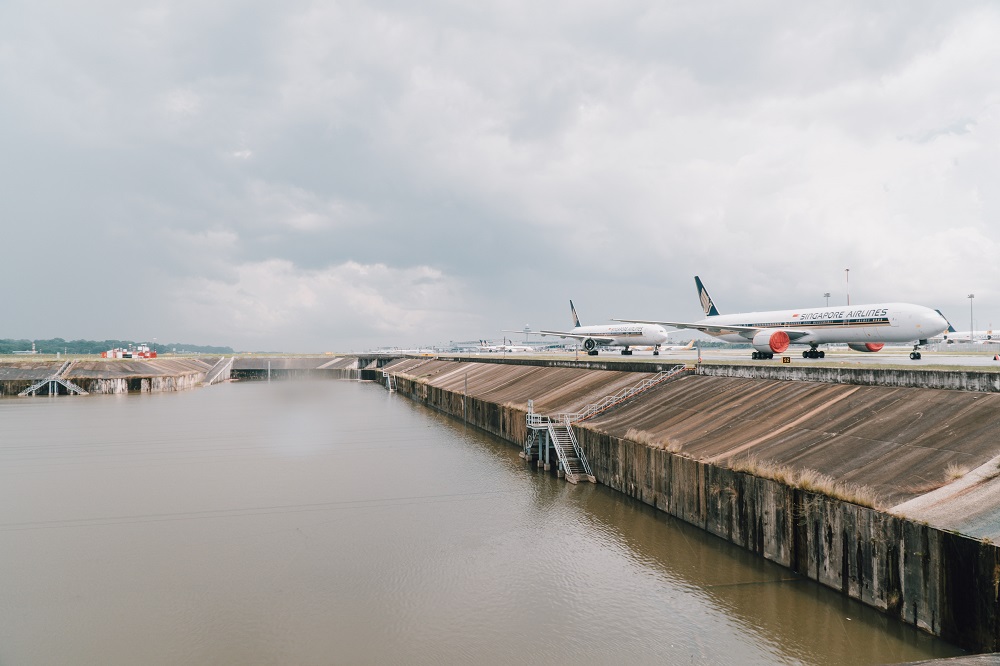 This detention pond, located at the south of Changi Airport’s aerodrome, regulates the water volume being discharged into the sea

Most of Changi Airport’s drains’ outlet leads directly to the sea, except for an outlet that discharges into a 16m wide canal. This canal takes on the catchment areas around the of Changi North area, including Terminal 3’s airfield and Changi Airport’s public roads area, as it continues southwards to the sea.

To better manage the peak discharge into this canal, the airport built a water detention pond of 540,000m3, or the size of 216 Olympic swimming pools, at the south of its aerodrome, leading to the canal. Water collected from Changi Airport’s T3 airfield and public road is typically held in the south detention pond first, before being discharged into the sea, during low tide.

The various measures and facilities work hand-in-hand to help the team at Changi Airport mitigate instances of flash floods and increase its climate resilience, along with other sustainability measures airport-wide.

2021 started on a hopeful note with the arrival of the Covid-19 vaccines, but as the year progressed, the virus threw out some curve balls. Changi Journeys looks back on the key milestones in Changi Airport in 2021.

Fostering the spirit of giving in Changi Airport

Digital transformation is a key thrust in Changi Airport Group’s journey toward becoming the most innovative company in Singapore. Learn about the new team formed to drive and coordinate this effort.