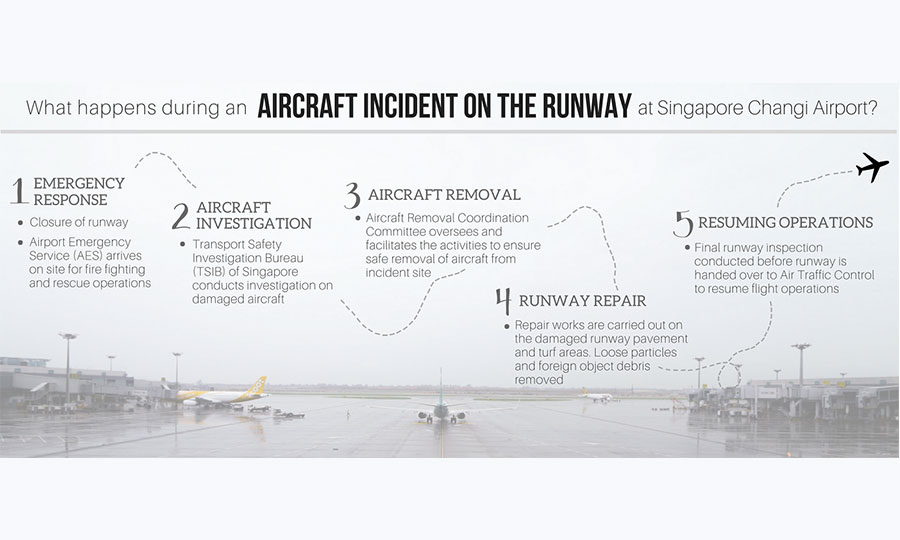 With about 7,200 flights weekly flights, Changi Airport is today the world’s sixth busiest airport for international traffic. This translates to about one flight taking off or landing every 80 seconds, keeping its two-runway operations busy round the clock. Thus, what happens in the unfortunate event of an aircraft incident on any of Changi’s runways? There’s no guessing that operations of the affected runway will be immediately suspended, leaving the other operating runway to manage flights. With runway capacity reduced by half, flight delays or even cancellations, will be expected. But how long will this disruption last? Changi Journeys shares insights on what it takes to resume safe runway operations.

Changi Airport Group’s Airport Emergency Service (AES) will be activated immediately to respond to aircraft incidents on the runways.   Specially trained to manage aircraft emergencies, the AES is expected to be at the incident site within two minutes to perform fire-fighting, as well as search and rescue operations.  Depending on the nature of the aircraft emergency and the number of persons affected, time taken for the completion of the rescue operations varies.  The AES will also have to assess and mitigate all fire risks and hazards which include the flushing of flammable fuel spillages and handling of any dangerous goods onboard the aircraft, if any.

Once the disabled aircraft has been safely removed and towed away, the runway is inspected for damages. Machinery will be brought in and asphalt concrete will be produced and delivered to the airport to commence repair works.  Next, in order to reinstate the visual aids for pilots, pavement markings are repainted while airfield ground lightings are fixed.  Changi stocks up on these spare fittings to support such emergencies and facilitate the reopening of the runway quickly. A runway friction test will be conducted to ensure that the runway is fit for operations.

Besides the runway, inspection of its surrounding area or turf is also carried out to ensure that there are no loose soil / turf particles that may  become Foreign Object Debris (FOD) which are hazardous to aircraft operations.  If the turf sustained damages, the area will also need to be compacted and repaired.  Once all works are completed, a runway sweep will be conducted to clear up any loose debris from the runway pavement.

A final inspection will be carried out to ensure that no FOD are left on the runway and all airfield ground lighting are serviceable before handing over the runway to Air Traffic Control to resume landing and take-off operations.

Ever wondered where your luggage is stored when you check-in early at T1?

T1 has been undergoing a series of upgrading works – from the Departure and Arrival Halls to the Transit Hall - to refurbish the terminal’s interior design, incorporate automation and enhance the passenger experience.

Here's how you can get an insider tour of Changi Airport

Changi Airport has introduced one-hour guided tours at each of its terminals so that passengers can make the most of their time in transit.

Bigger and Better than Before - iShopChangi

With the rage for online shopping nowadays, e-commerce platforms are an increasingly important tool to enable retailers to reach out to a wider target audience. Realising that the online shopping trend is here to stay, Changi Airport has also been steadily developing its online platform, iShopChangi.