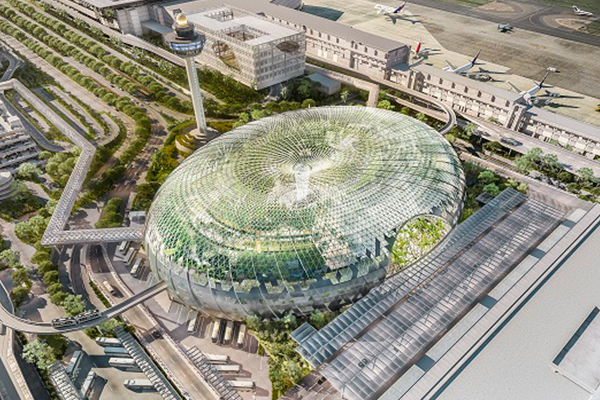 To date, about 85% of Jewel Changi Airport’s (Jewel) construction has been completed. Before this iconic landmark opens its doors to the world in 2019, Changi Journeys speaks to Jewel’s Projects Team on five notable feats that make this unique development a modern engineering marvel.

1. Jewel was built right in the heart of Changi without disrupting operations

Changi's new icon nestled amid three terminals of the airport

Despite its position in between Terminals 1, 2 and 3, the engineering team has been working its magic for the last four years right in the middle of the entire airport's operations. This was a major feat for the team, to continue building out Jewel without impacting airport operations and affecting the traffic flow to and from the airport.

2. With a 5-storey basement, Jewel required the deepest excavation works in the area 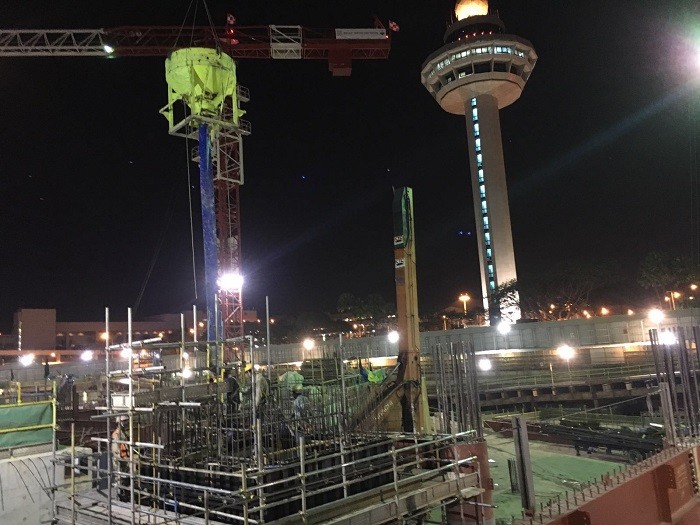 Jewel is a 10-storey building with five levels above ground and five below. With the development having the deepest basements in the whole of Changi Airport, many studies, including geotechnical studies, had to be conducted by the Projects Team to assess the soil condition and impact to surrounding buildings. Typically, basements are constructed from the bottom-up, whereby all the soil is excavated, and foundations are placed from the bottom and working upwards. But this method could not be used because of the buildings surrounding Jewel, including the Air Traffic Control Tower.

Instead, a top-down construction method was adopted for Jewel. Excavation and construction works were done one level at a time, moving downwards, while all adjoining structures around Jewel were monitored round the clock to ensure they are not adversely impacted throughout the development works.

3. Jewel is actually being built around the existing Skytrain track 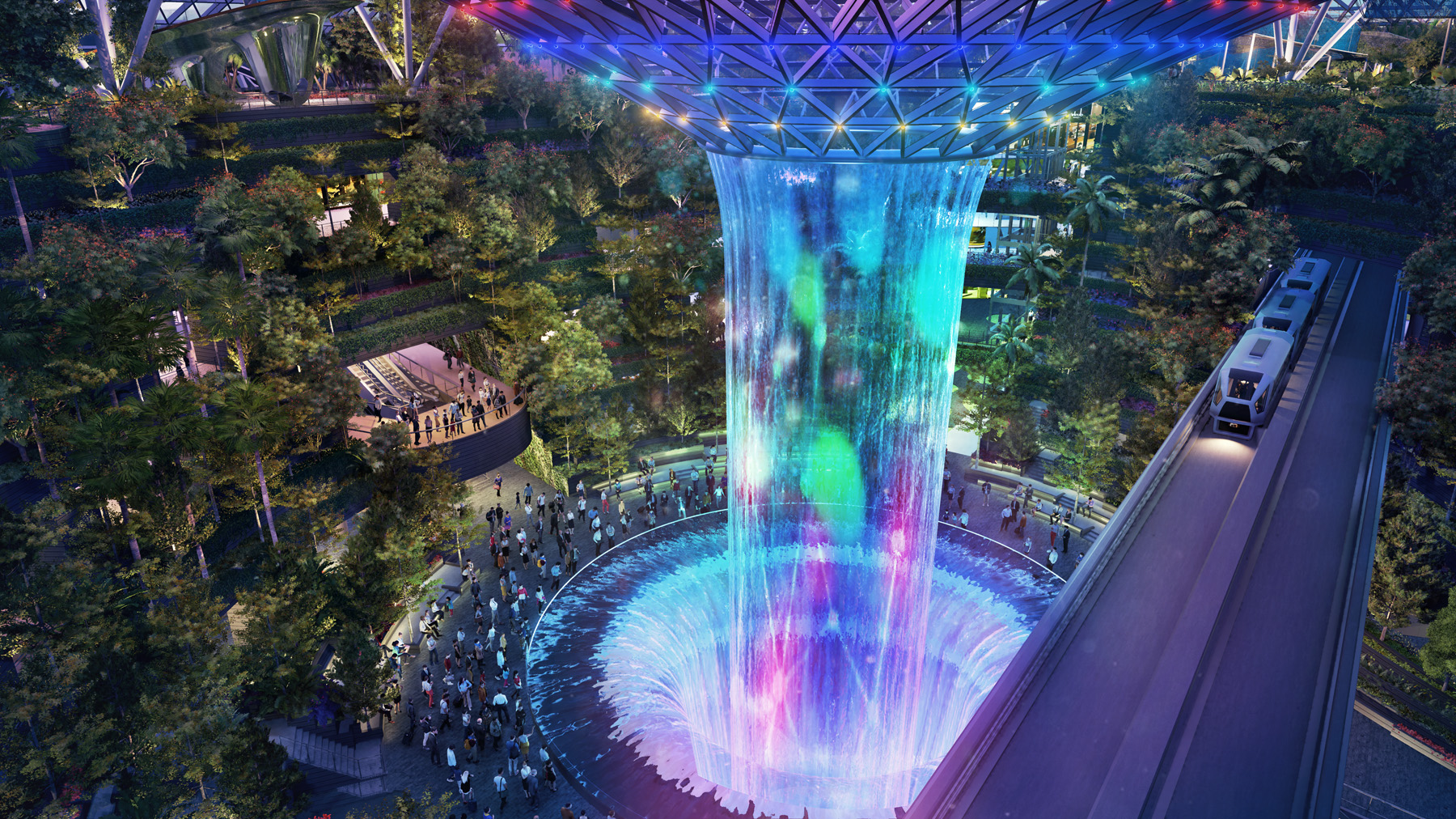 One key feature of Jewel is the Rain Vortex, the world’s tallest indoor waterfall that stretches over seven floors. The original intent was to build the Rain Vortex at the centre of Jewel. However, because Jewel was built around the existing Skytrain track, the section of the track that connects Terminals 2 and 3 now runs right through the middle. To work around the fixed structure of the Skytrain, the team had to construct the Rain Vortex slightly off-center, while keeping it a safe distance from the Skytrain. Unless anyone has a bird’s eye view of Jewel, this will be almost impossible to notice. 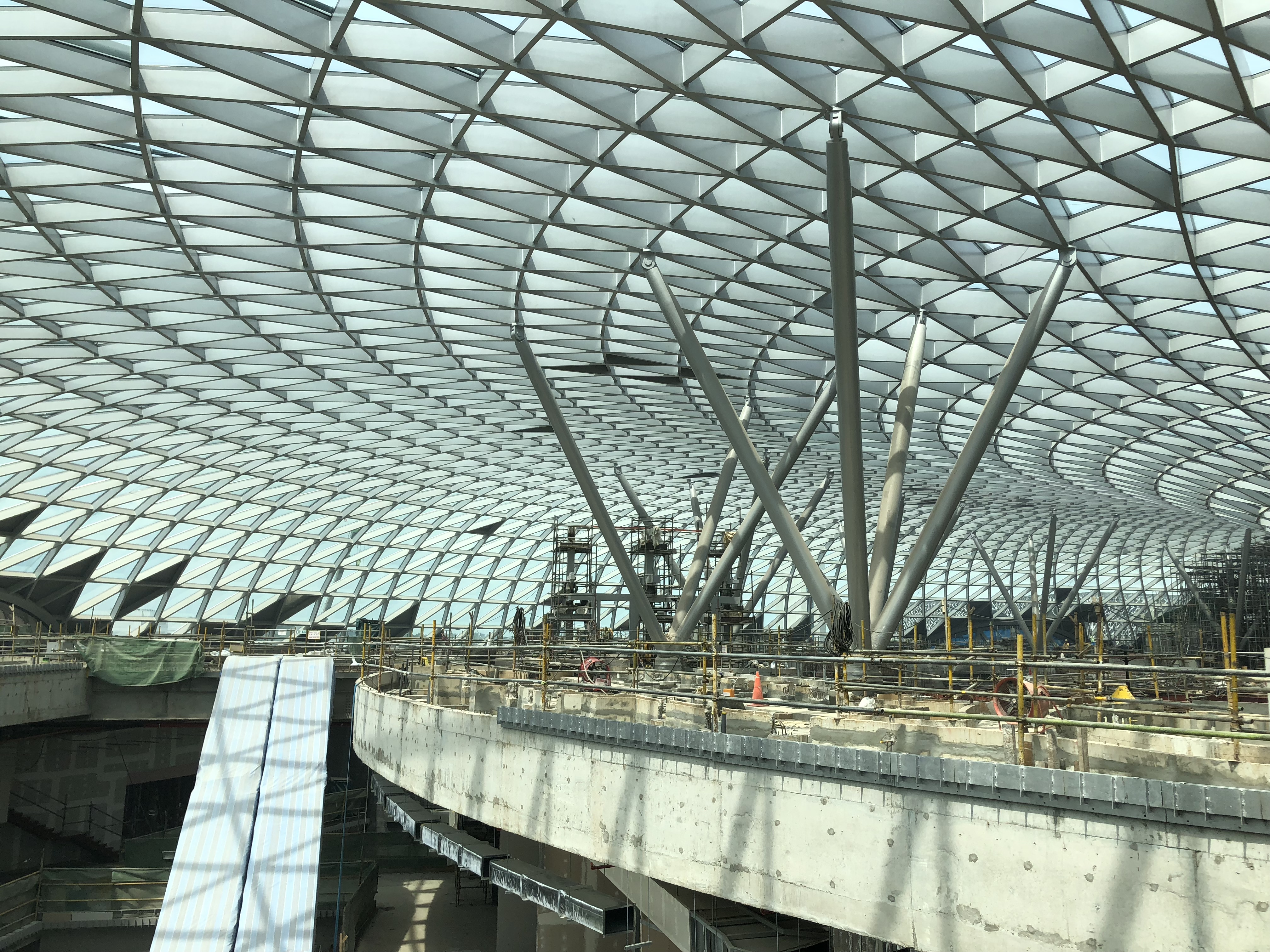 Jewel’s Canopy Park and Forest Valley are filled with lush greenery and integrated with a variety of offerings like play attractions, gardens, walking trails and dining outlets. For visitors to fully enjoy these unique features without visual obstruction, Jewel has to be free of columns. But consider this - Jewel’s roof façade weighs 3,500 tonnes, equivalent to six A380 planes, and spans over an area 200 metres long and 150 metres wide. For a roof of this size to be column-free, the roof requires a support system.

The architects designed a support system comprising a ring beam and 14 tree-like columns circling the edge of the roof, each column extending to 12 metres in height.  This props up the entire roof façade around its perimeter, and this super-sized cantilevered roof is now literally suspended in air at 37 metres above ground.

5. Underground vehicle access had to be built around vital airport operation services


A substantial amount of road works and diversions had to be done while constructing the roads leading to Jewel. this includes ramps that lead vehicles to the basements of the new complex.

For the latter, a big part of the work is done underground. However, there is a significant number of vital services running through the location of these ramps, supporting the daily operations of Changi Airport, including the water pipes, telecommunication lines and critical services connecting the terminals to the Control Tower. Any type of impact on the services will be detrimental to airport operations as a whole.

The Projects Team hence had to tread very carefully when working in these locations, making the construction of these ramps one of the most challenging task in the entire Jewel development project.

See Slices of Singapore's past at Changi Airport

Passengers taking the underpass from T4 car park to the terminal would have caught first glimpses of local heritage scenes being painted on the underpass walls. Local artist Yip Yew Chong has been working on this 37-metre-long mural since July.