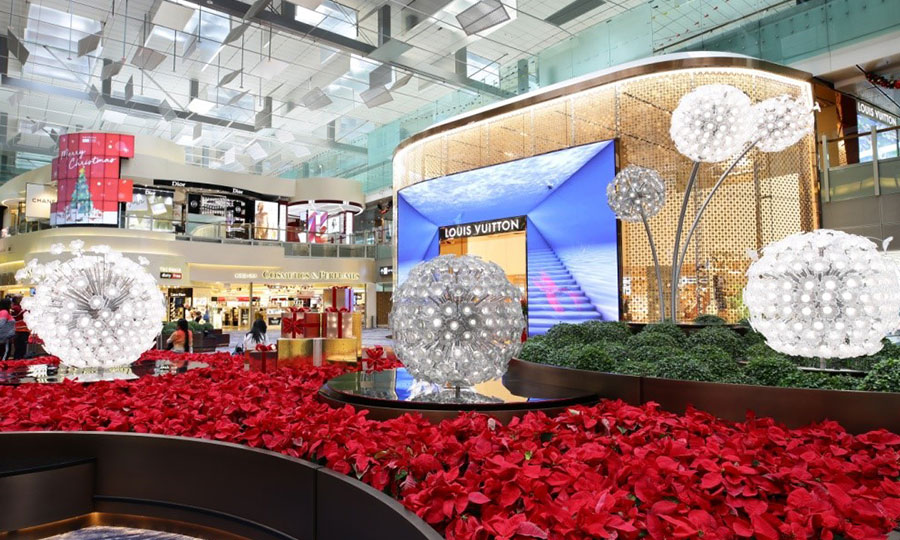 Refreshing our facilities in the terminals frequently is how Changi ensures that passengers continue to enjoy a great Changi Experience whenever they pass through the airport. Rejuvenating our offerings not only helps to keep the terminal fresh, it also gives passengers something to look forward to the next time they travel through us.

Many may not know that Terminal 3 has been in operations for about 10 years now. To invigorate the Central Piazza to keep in line with the new shops in its surrounds, the area was redesigned into a contemporary nature centrepiece with the airport’s seventh feature garden made up of elegant glass dandelion sculptures – the Crystal Garden.

Brought to life by tiered garden beds incorporating a curated selection of flowering plants and 12 spheres of artisan dandelion glass sculptures in varying sizes, the glass sculptures glow with luminance through numerous fitted LED chips, creating the illusion that they are floating on pools of water or swaying in a breeze - offering passengers a captivating and unforgettable experience amidst a garden of lights. 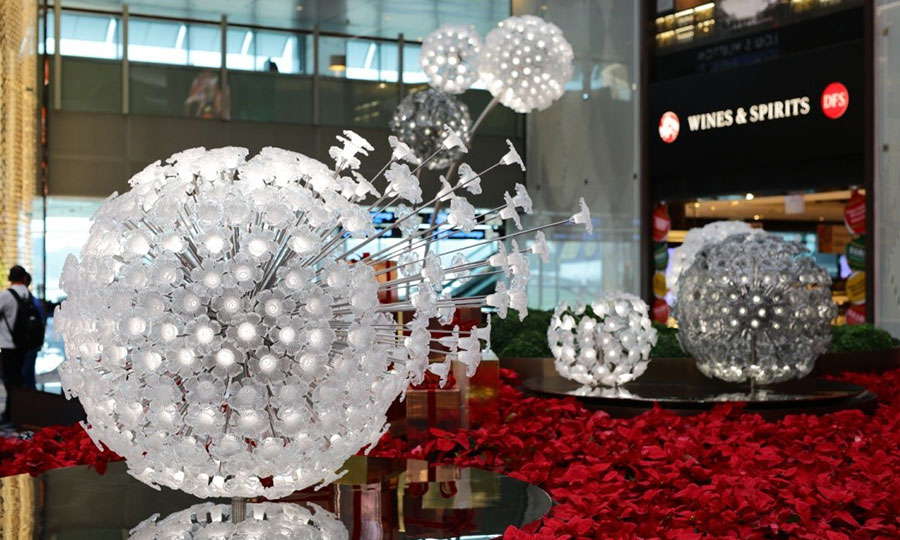 Specially conceptualised by local firm Janet McGlennon Interiors Pte Ltd (JMI) in collaboration with LASVIT's designer Petra Junová, the installation comprises 1,735 glass components hand blown with different finishes to give the sculpture a rich texture. The Crystal Garden gently integrates nature into the Central Piazza, presenting travellers with an interesting juxtaposition of poetic calm amidst a burst of colour and activity. The seeds of the dandelions floating across the Crystal Garden represent passengers on their onward journeys, spreading out to different corners of the world, as seeds would travel.

In addition to revamping the front of the Central Piazza, a new seating lounge area was also added to the back of the area. Also designed by JMI, the lounge area provides a place for travellers to congregate in an intimate five star hotel setting. With semicircular pods and paired wing-backed chairs, the space echoes the Piazza’s colours, patterns and organic motifs, providing a ‘welcoming’ experience for passengers.

Changi East in 2017 and Beyond

Spanning a massive 1,080 hectares (equivalent to more than 660 football fields), the Changi East project is Changi Airport’s largest development in its history.  An inter-agency Changi 2036 Steering Committee was established in 2012 to develop a plan for this mammoth expansion for Changi, which included a recommendation to construct a fifth terminal, Terminal 5 (T5).

Besides T5, the scope of works for this mega-project also includes the operationalisation of a three-runway system, the construction of tunnels and other underground systems, and the development of cargo complexes and other supporting infrastructure.  Being a greenfield development site, located to the east of the existing airport (hence the name Changi East), basic infrastructure, including utilities, water management systems, ground transportation (road and MRT) will need to be built and this will take several years before airport facilities are commissioned.

To keep the retail proposition fresh and exciting for shoppers, the Commercial team at Changi Airport is always on the lookout for novel retail concepts and experiences that it can bring to travellers.

To ensure that T4’s commercial offerings would excite and enthrall, despite being the most compact terminal in Changi Airport, it’s commercial layout and offerings have been carefully thought through. For the first time, the anchor categories – Liquor & Tobacco and Perfumes & Cosmetics – are located within the same zone to test out the integrated duty-free concept. While the concept of an integrated duty-free zone has been done in some airports around the world, Changi Airport is the first to feature 2 operators within the same zone. This is the result of a strong tripartite collaboration between Changi Airport and the two anchor duty-free operators, DFS and Shilla Duty Free.

With more than 4.7 million passengers travelling between Singapore and China in the first nine months in 2017, China is one of the fastest growing key country markets for Changi Airport. Working hard to improve the 11% year-on-year growth of Chinese passenger movements, Changi Airport Group (CAG) is collaborating with various airports and airlines to grow new city links in the coming months, to further improve connectivity to the country. By the end of 2017, 13 airlines will offer routes connecting to 35 cities in China, with more than 700 flights to and from China on a weekly basis.