Ever Wondered How Changi’s Gardens Look so Lush? 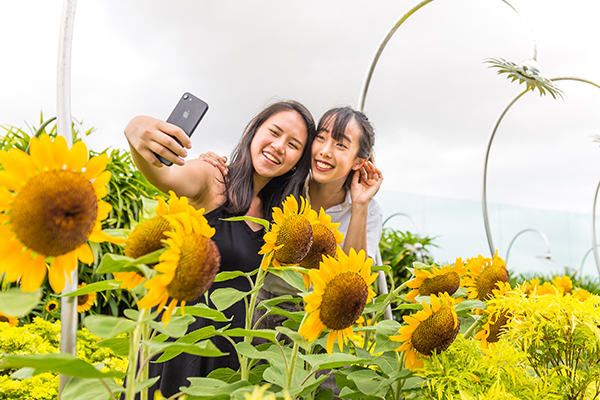 It’s all thanks to Changi’s Horticulture team that continually showers TLC on all the greenery in Changi Airport – including 50 species of flowering plants that are specially grown in the airport’s nursery.

There is nature all around Changi Airport – and for good reason. In the fast-moving airport environment, nature has a soothing effect on those who might feel stressed out by the pace of travel.

It’s not difficult to miss the well-designed gardens and green spaces around the airport where passengers can break away from the bustle. Flowers in particular can definitely brighten someone’s mood.

Did you know, some of the flowers in Changi’s gardens are lovingly grown by the airport’s in-house Horticulture team in its nursery. Built on a plot off the airport grounds, the nursery is home to 50 species of budding flowers tended to every day by the team and transported weekly to Changi’s gardens.

The Sunflower Garden at Terminal 2 has 500 stalks of bright-yellow sunflowers, all of which are grown in the airport’s nursery. Depending on the season, travellers can spot at least two types of sunflowers at this rooftop garden, ranging from species like Sunflower Sunshine, Sunflower Jupiter, Sunflower Ring of Fire and Sunflower Red & Orange to other seasonal variants. These sunflowers take approximately two months to grow at the nursery, reaching a height of about 1.3 metres by the time they are seven weeks old. However, these delicate sunflowers only last about a week in their adulthood.

To ensure the Sunflower Garden looks its best all the time, weekly maintenance is carried out – when up to 500 sunflowers are brought into the garden, and the same number changed out each week. The process follows a fixed schedule. Every Monday morning, the gardeners will select and transport the batch of fresh sunflowers from the nursery to the airport, and then transplant them into the Sunflower Garden. On Thursdays, the gardeners will do a final check and replace any dying sunflowers so that the garden is ready for the influx of passengers during the weekend peak. 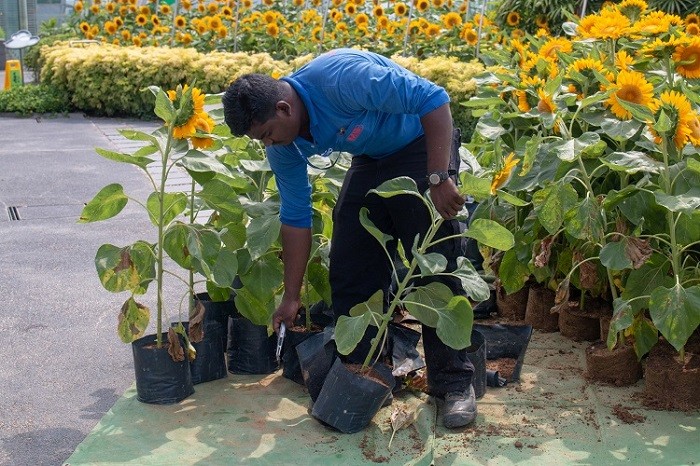 The Butterfly Garden at Terminal 3 is another favourite spot among passengers. With over 1,000 free-roaming butterflies, flourishing flowers, lush greenery, and a six-metre-tall waterfall, this two-storey garden houses about 20 species of flowers, most of which are grown in the airport’s nursery. Unlike most conventional gardens, all the flowers in the Butterfly Garden are chosen for one of three purposes – nectar for the butterflies, room for butterflies to roost or food for caterpillars. They are also pesticide-free, and have to be grown and cultivated in a separate area at the nursery. 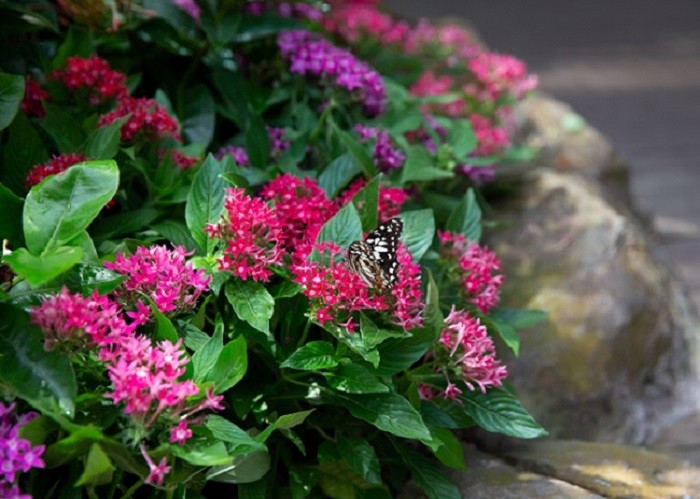 Each week, all the flowers at the Butterfly Garden need to be changed out so that the butterflies get fresh supplies of nectar.

Similar to the sunflowers, these beautiful blooms need to be changed weekly because the butterflies need fresh supplies of nectar and most of the nectar-producing flowers cannot grow and thrive inside the Butterfly Garden. Close to 200 pots of flowers are replaced with fresh ones each week.

The passion and dedication of Changi Airport’s Horticulture team are truly reflected in the breath-taking gardens and lush greenery in every terminal. With so much nature in the airport, passengers can literally slow down and smell the flowers at Changi.

The Thinking Behind Changi's Playground Design

At Changi, we understand that travel can be a stressful experience. At such, the design of every terminal incorporates plants and at least one garden. Being a family-friendly airport, Changi has also installed play areas in every terminal for every child's enjoyment.

With a flight taking off or landing every 80 seconds at the world’s sixth busiest airport, constantly striving for safe and efficient airport operations is essential. Over the past few years, Changi Airport Group has embarked on a series of trials and innovations, with the aim to continue to minimise incidents on the airside, with the ‘gold standard’ of bringing it to as close to zero as possible.

iChangi: Now a “Library” in the Palm of Your Hand

Since its launch in 2010, the iChangi app has been downloaded by millions. Over the past year, several new functions have been introduced. One of them will please the voracious readers among us – the iChangi app is now an e-reader too.