See Slices of Singapore’s past at Changi Airport 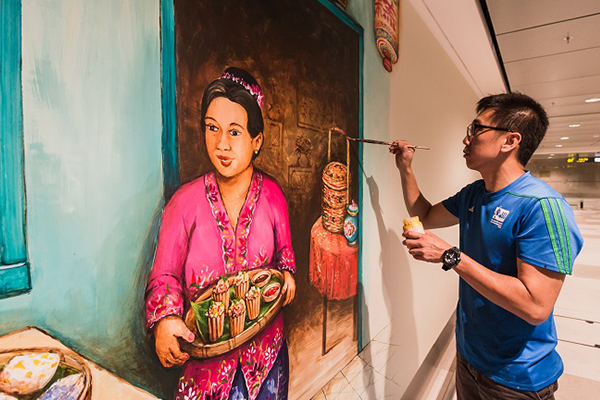 Passengers taking the underpass from Terminal 4’s (T4) car park to the terminal would have caught the first glimpses of local heritage scenes being painted on the walls of the underpass.  Local artist Yip Yew Chong has been working on the 37-metre-long mural since the start of July 2018.

As the first hand-painted wall mural at Changi Airport, the artwork represents six treasured slices of life in Singapore’s past, welcoming visitors with local heritage even before they step into T4.

The mural includes scenes of everyday life that Singaporeans can relate to, such as a Peranakan shophouse selling Nyonya Kueh, a Malay Batik store and an Indian garland shop.

“These scenes not only evoke nostalgia among locals, but also present little known but important aspects of Singapore’s culture to both visitors and international travellers passing through Changi Airport,” says Asmidah Ong, senior associate with CAG’s Experience Creation team.

The murals are also an extension of the heritage theme that T4 has come to be known for. Some of the more popular installations in T4 are the heritage-themed shophouse façades at the Heritage zone, the multimedia display of the "Peranakan Love Story" musical created by Dick Lee, and sculptures such as "Hey! Ah Chek" featuring a scene from the 1960s Chinatown in Singapore.

“To ensure that the artwork would resonate well with locals and bring about an engaging experience, we specifically sought out Yip Yew Chong, who is well-known for his iconic life-sized murals in heritage areas of Singapore, such as the Thian Hock Keng temple mural at Amoy Street and ‘Kampong Gelam’ at Jalan Pinang,” said Asmidah.

What followed were numerous meetings and discussions with the artist to nail down the details that would best show unique experiences of life in Singapore. They finally decided on six scenes, each depicting a unique aspect of multi-cultural Singapore.

To make the murals life-like, Yew Chong used 3D hand-painting techniques to simulate the experience of walking through a street in old Singapore.

“When tourists move from the airport to the city, when they pass through this underpass, they move through the sights and sounds of old Singapore, and exit into the big city – the modern and big city of today,” said Yew Chong, explaining the big picture he had in mind.

Interview with the artist

When asked about the concept behind his paintings, Yew Chong explained, “I tried to capture all the multi-racial cultures of Singapore and what better way to present them than through food, and the various colourful shops of old Singapore?”

Collectively, the T4 Murals will be the longest indoor painting the artist has done.

Students from Metta School, one of CAG’s beneficiaries, were invited to participate in the creation of the murals.  The students contributed to the batik store scene, and they were excited to be able to work alongside Yew Chong.

The murals are expected to be completed by 20 July 2018. Come by to check them out and capture some Insta-worthy moments at T4!