Keeping the skies above Changi Airport free of birds is critical for safe flight operations – hitting a bird, also known as a bird strike, can greatly damage an airplane, and endanger the lives of passengers in it.  Case in point, the famous Miracle on the Hudson in 2009, where a US Airways plane departing from New York’s LaGuardia Airport was forced to land in the Hudson River, was caused by a bird strike with a flock of Canadian geese. Changi Airport Group (CAG) thus has an Airside Management Safety Inspection Team (AMSIT) of 12 officers, whose job is to ensure that the airport’s aerodrome is free of birds, as well as other wildlife, among other duties.

Starting at 6.30am every morning, AMSIT conducts patrols of the airfield at regular intervals throughout the day. The patrol team looks out for birds in the areas around the taxiways and runways, while also remaining vigilant for other non-avian animals that might have wandered into the airfield, like monitor lizards and dogs.

When birds – the most common ones being mynas, swallows, and swiftlets, with the occasional egret, kite and eagle– are spotted near the runways, the patrol team deploys an array of equipment, ranging from the high-tech to the more basic, to disperse them safely. Among the more advanced technology that is used is the Long Range Acoustic Device (LRAD), a large vehicle-mounted gadget resembling a large speaker, which projects sound waves to a distance of up to 3km to frighten birds away. 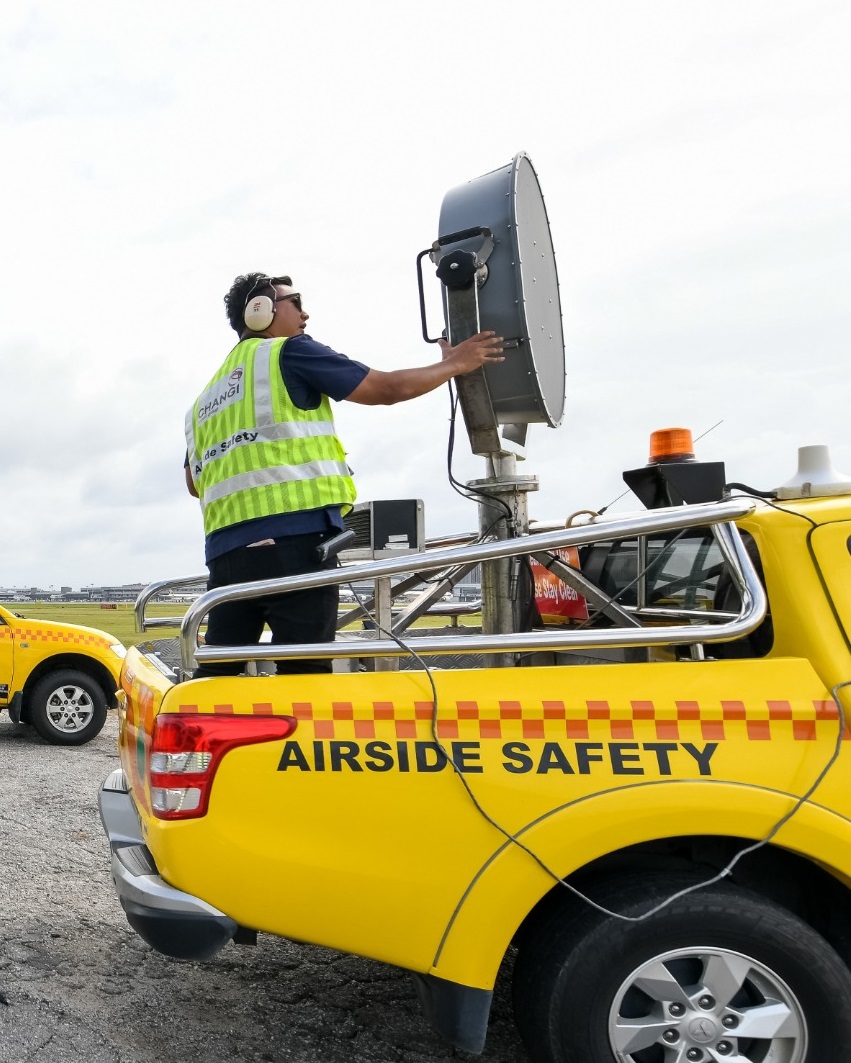 The LRAD is mounted on the back of a patrol vehicle.

Similarly, the handheld aerolaser can fire a laser beam up to 2.5km away. The laser is harmless to birds, but they perceive it as a physical danger, and will be spooked away. 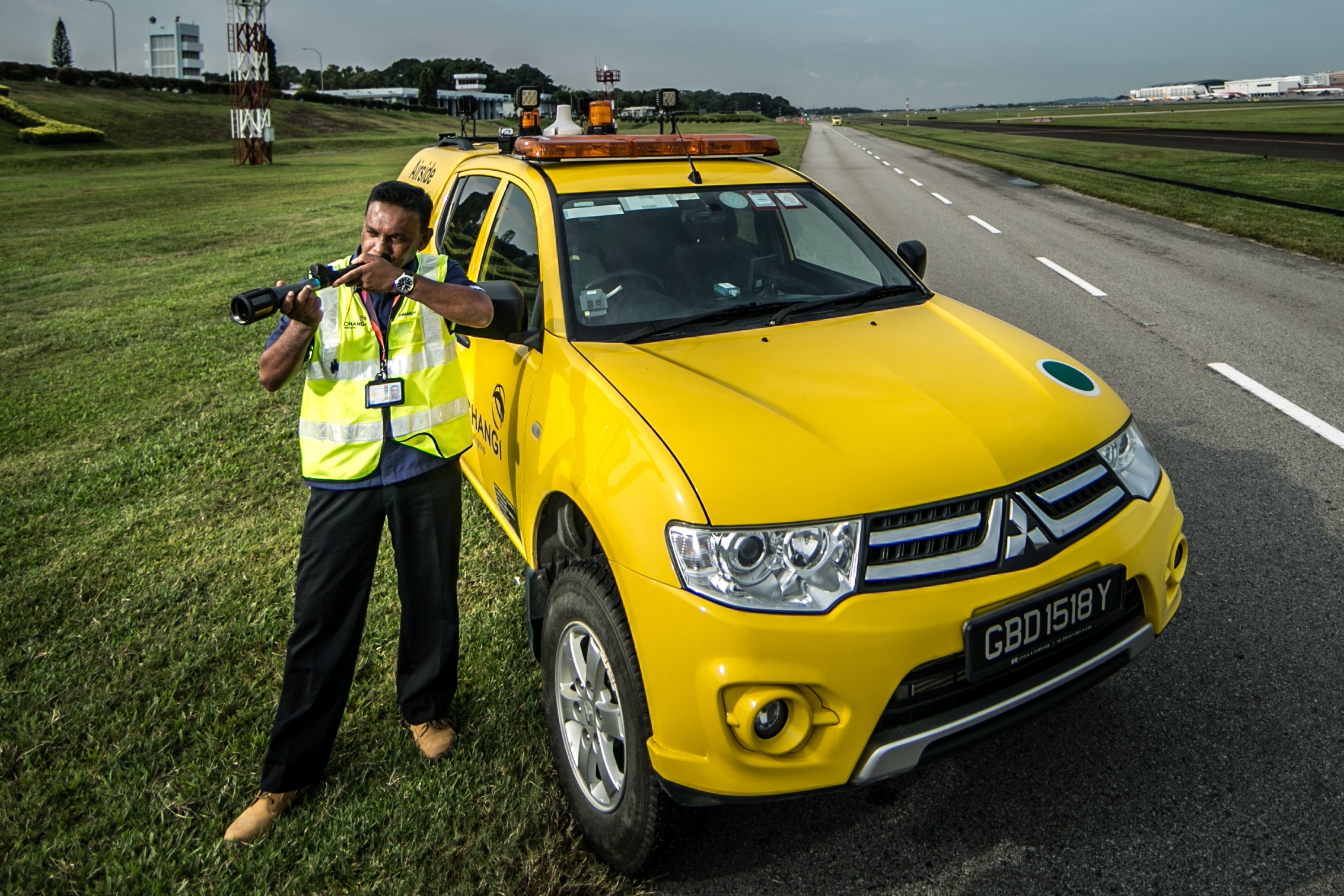 The aerolaser projects a laser beam and scares birds away.

On the more manual end of the spectrum is the stockwhip, which is one of the latest additions to the wildlife dispersal toolbox. It takes specialised training for new staff to learn to wield this whip, which produces a booming sound when cracked in the air, scaring wildlife off. 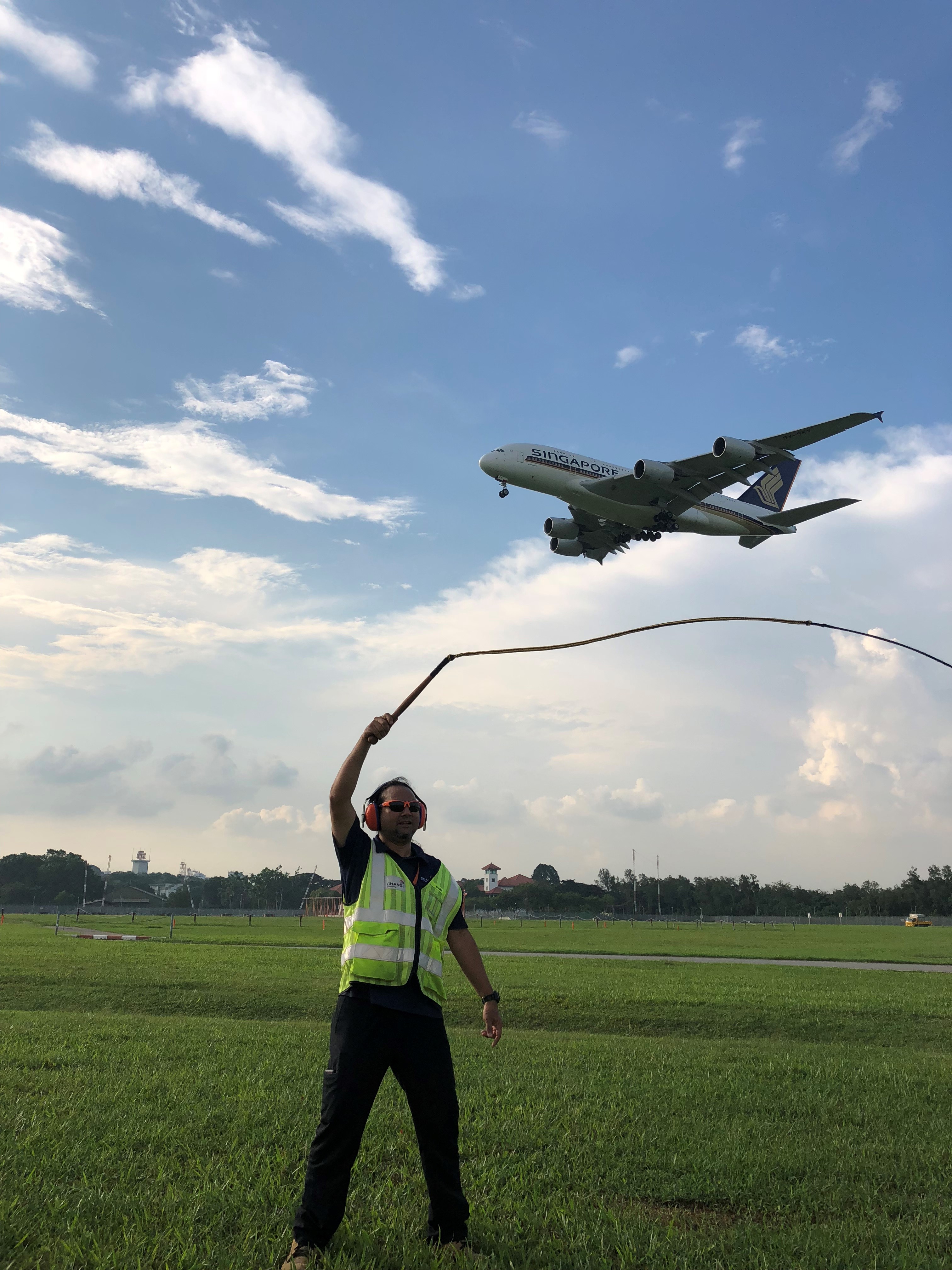 AMSIT’s patrols end at around 7pm each day, when birds have flown off to roost elsewhere. But when not on patrol, AMSIT’s skills in handling avian situations also come in useful.  Johnson Lim, Support Officer, AMSIT, recalls an incident from earlier this year, when there was a “peculiar visitor” at the T3 baggage area. This “visitor” turned out to be a blue-and-gold macaw – AMSIT was activated by ground handling agents, and Johnson was despatched to attend to the situation. Johnson brought the tired macaw back to the AMSIT office, where the team discovered that it was a lost pet, and eventually reunited it with its owner.

Johnson with the rescued macaw.

AMSIT’s work is part of the anti-wildlife measures that have been put in place by CAG. For example, CAG’s horticulture team ensures that there are no fruit-bearing trees or plants, which would attract animals, planted in the airport, while the engineering team keeps the grass around the runways and taxiways trimmed to deter birds from feeding on grass seeds, or nesting and hiding there.

Thanks to the hard work of these airport staff, flights at Changi can continue to operate with the highest levels of safety.

From the roads your car glides on, to the vibrant roadside vegetation and clearly marked road signs, the Changi experience begins as soon as you get on Airport Boulevard.

Changi Journeys brings you behind-the-scenes stories of the teams who make this first impression that much more special.

Like many staff at Changi Airport, Duty Terminal Managers have seen their roles evolve in the past few months to cater to the changing needs of passengers passing through Changi. Find out how their roles have taken an unusual turn here.

Volunteering virtually in the midst of Covid-19

Leveraging on digital capabilities, Changi's CSR team and volunteers continue to help beneficiaries from NorthLight and Metta School during the Covid-19 pandemic. Learn more about how they did it here.