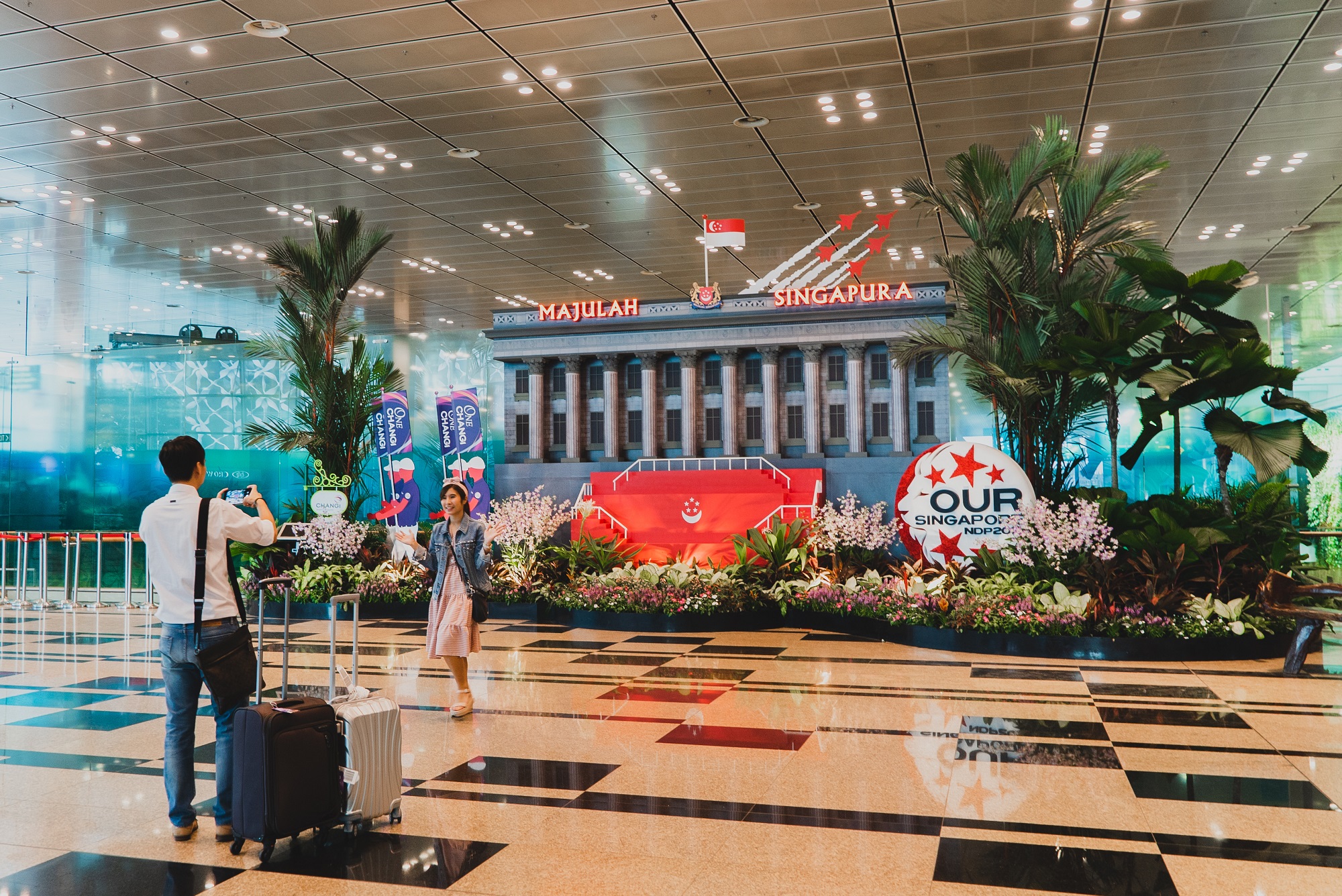 Changi Airport’s largest display this year at five metres tall, a replica of the Padang proved to be a popular photo spot among visitors and travellers.

To celebrate National Day this year, Changi Airport has put up 22 horticultural displays across all four terminals. Bringing the celebration and high spirits to travellers all the way from the National Day Parade at the Padang, Changi was also one of the few locations in Singapore to screen the parade live and even had funpack giveaways.

Delighting passengers at the Terminal 3 Departure Hall near the Jewel Link Bridge is an impressive five-metres-tall replica of the Padang, where the ONE Changi contingent marched at as part of the National Day Parade. Apart from Changi Airport Group, this was the first time the contingent featured representatives from various airport partners such as Immigration and Checkpoints Authority and Certis CISCO, so the addition of the ONE Changi figures to the display was especially significant.

From brainstorming ideas to planning and design, preparations for the National Day themed horticulture displays started as early as 3 months before. The months of preparation came to fruition overnight, with almost 20 people involved in the installation process of the enormous Padang display, astounding passengers in the morning. The installation began promptly at midnight and continued into the wee hours of the morning to ensure that there would be little to no impact to travellers. It took a total of about six days to set up all the horticultural displays across the four terminals. For the smaller displays, it took about 30 minutes while the larger and more elaborate displays took close to 3 hours.

On top of that, 5 other main horticultural displays were erected. All displays will be up until the end of the month. 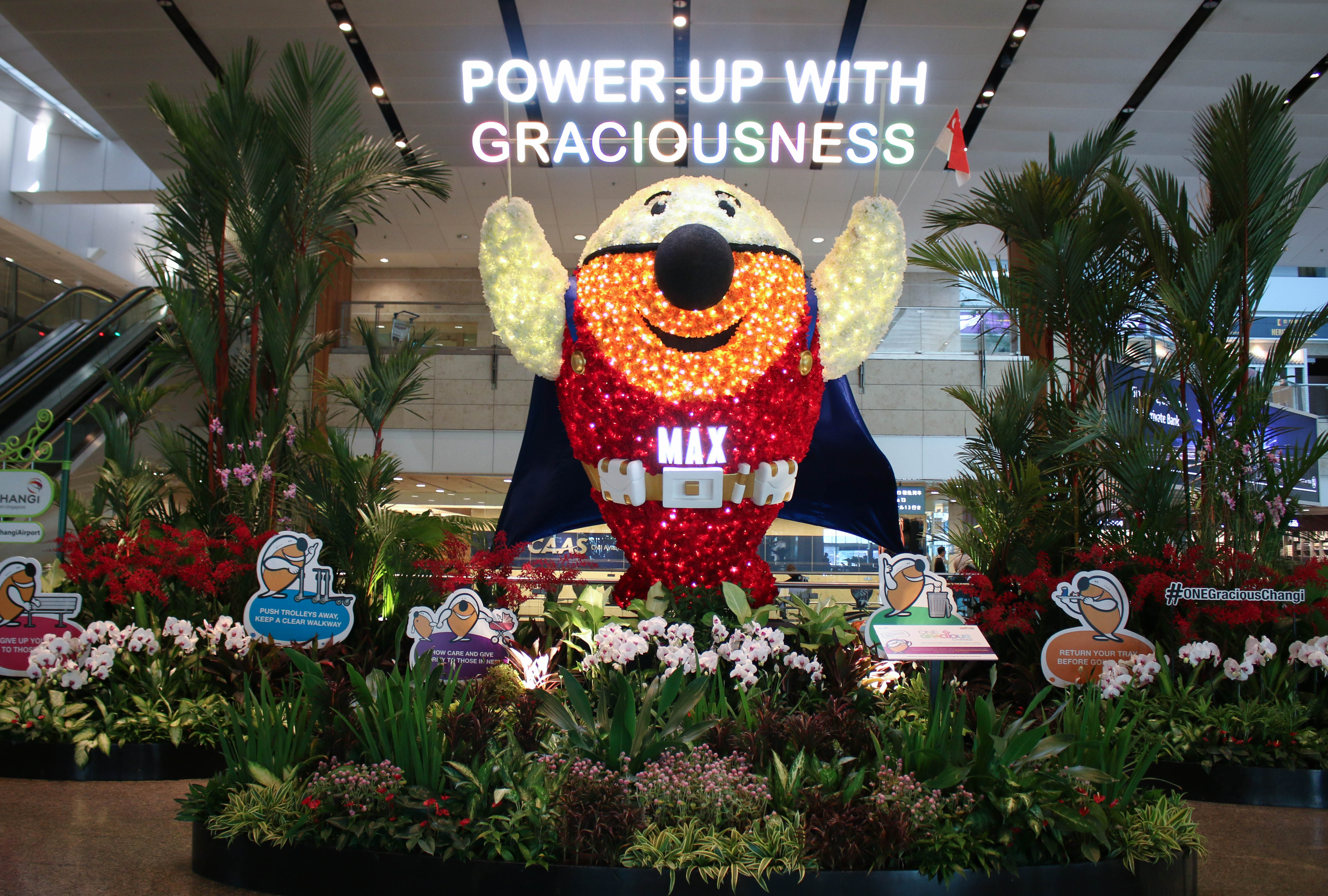 In the T2 Departure Hall near the train station, Changi Airport’s very own mascot, Max the plane, clutches the Singapore flag proudly in his wings.

As part of the National Day event at ST3PS, attendees were also delighted with live magic and music performances by local artists prior to the live screening of the parade and the local movie screenings that followed. The first 100 Changi Rewards members went home happily with official National Day Parade fun packs, and other giveaways such as exclusive shopping and dining vouchers were also given out on a first come, first served basis.

Over at the transit halls, travellers were not neglected - Changi Experience Ambassadors (CEA) kept passengers entertained with fun art and craft activities, a Singapore-themed Bingo game and National Day song performances across the terminals.

Complete with props and instant photo printers, passengers could bring home a momento of their time celebrating National Day at Changi Airport.

As one of the few places in Singapore to screen the National Day Parade live, along with the installation of National Day-themed horticultural displays and the activities planned for locals and foreigners, visitors and travellers, Changi hoped to bring the Singapore spirit to the airport. All these were part of Changi’s efforts to offer visitors and travellers a personalised, stress-free and enriching experience at the airport by evoking a sense of home and belonging for locals and giving foreigners a taste of the National Day atmosphere in Singapore even if they were only passing through for a short layover.

From retail and dining options to fun attractions, Changi Airport’s retail strategy is integral to the airport’s efforts to compete in a dynamic and challenging aviation industry. Read on to find out more.

Does your favourite airline not fly to certain destinations? Or did you have to check-in again for your connecting flight? Changi Journeys explains the different types airline partnerships. Read on to find out how this works and how it might affect you.