Building for the future to secure
Changi Airport’s position as a leading air hub.

What is Changi East?

Changi Airport’s passenger traffic has grown steadily in the past decade, with an average per annum growth of 5.4%. With the prospect of strong aviation growth over the next 20 years, particularly in the Asia-Pacific region, demand for air travel is expected to increase and traffic at Changi Airport is anticipated to grow in tandem. 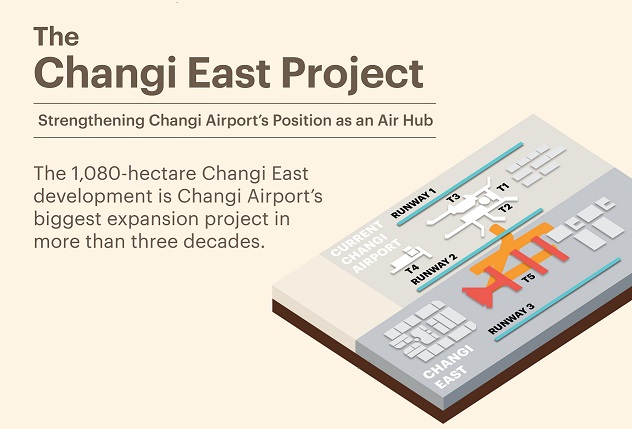 Spanning a massive 1,080 hectares, the Changi East development will provide future capacity for Changi Airport to ride on the projected growth in air travel. The development will serve to secure Singapore’s air hub status and ensure its continued competitiveness and relevance.

Spanning a massive 1,080 hectares, the Changi East development will provide future capacity for Changi Airport to ride on the projected growth in air travel. The development will serve to secure Singapore’s air hub status and ensure its continued competitiveness and relevance.

Scheduled for completion in the 2030s, T5 will be able to handle up to 50 million passengers per annum (mppa) in its initial phase. Including additional capacity from T2’s upgrading works, this would bring Changi Airport’s total passenger handling capacity to around 140 mppa.

T5 will be linked to the other terminals at Changi Airport, allowing the expanded Changi Airport to be operated as a single, integrated airport for ease of transfer between different terminals with airfield operational efficiency. New facilities, such as navigation aids, airfield lighting systems and a fire station will also be constructed. 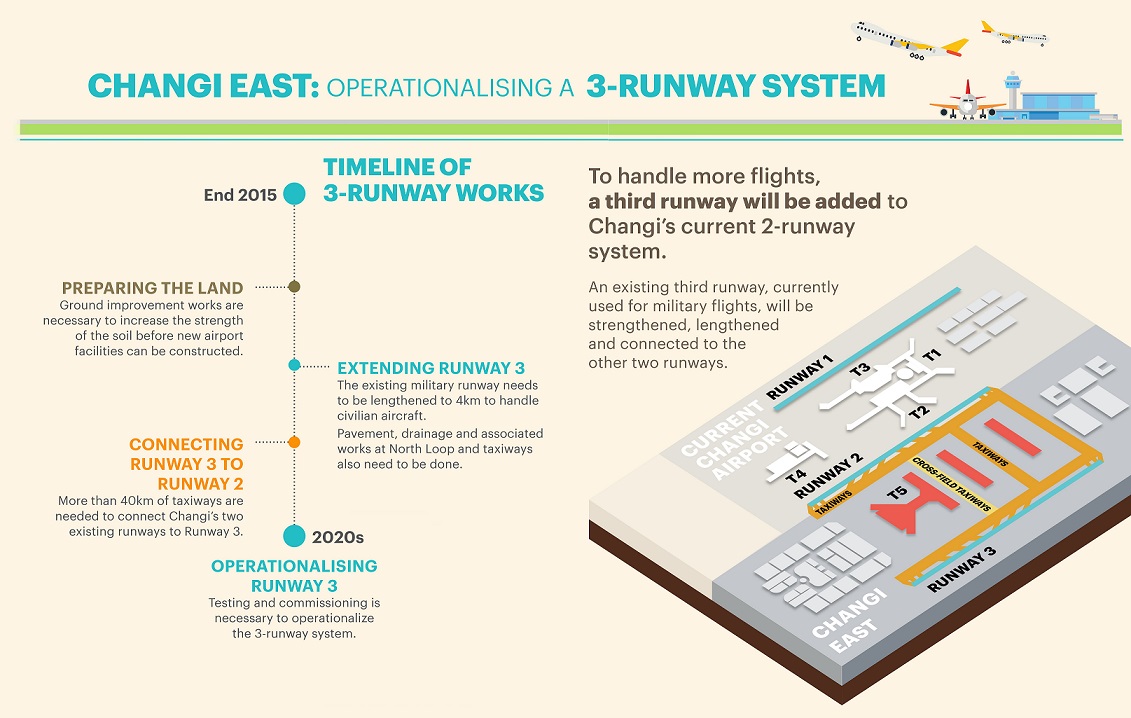 The existing third runway, previously used only by the military, has been extended from 2.75km to 4km to handle larger passenger aircraft, and converted for joint military-civilian use.

Under the three-runway programme, almost 40km of new taxiways will also be built to connect the runway with the rest of Changi Airport. This three-runway system is scheduled for operationalisation by the mid-2020s. 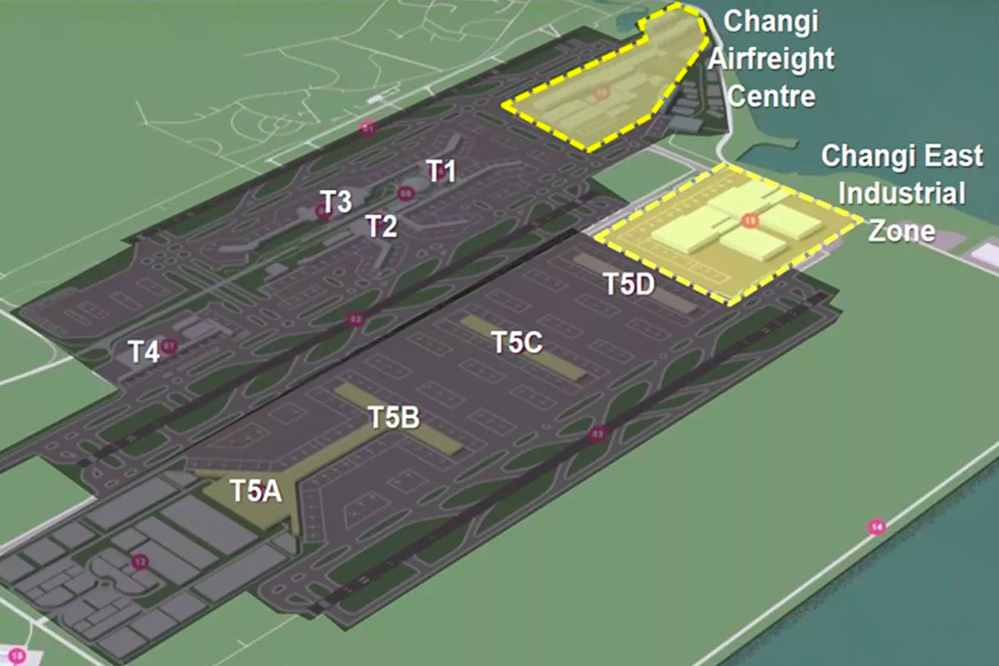 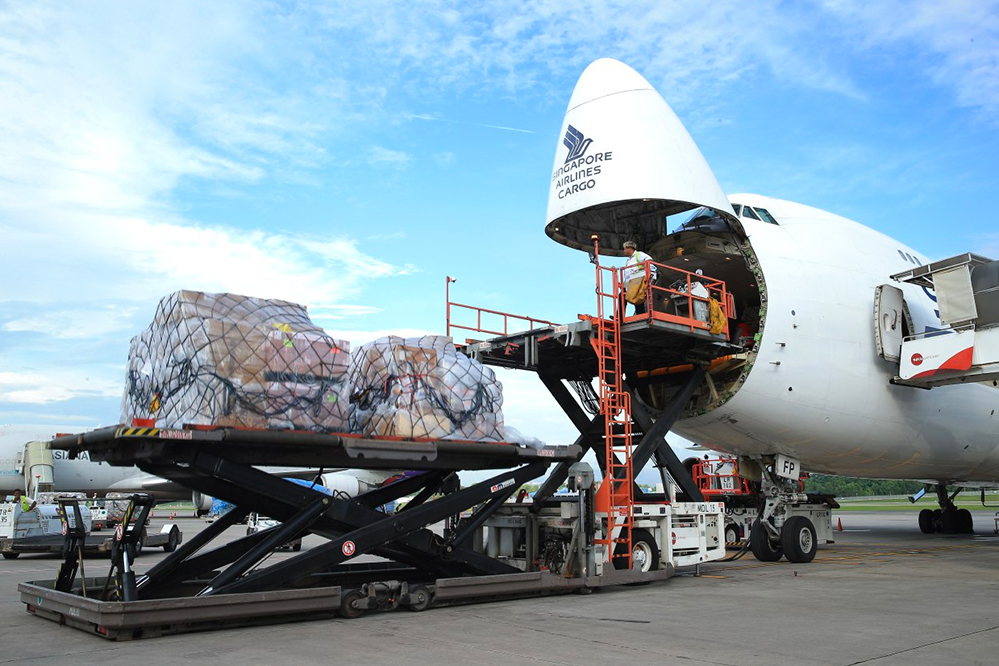 The future expanded air cargo hub will be smarter, more connected and more efficient. The use of data and technology with a focus on automation will reduce processing time, and improve productivity and cargo visibility.

With environmental and workplace sustainability in mind, the new air cargo hub will feature eco-friendly handling equipment, convenient amenities and a land transport network for staff. 2014: Start of land preparation works. Planning for T5 begins, including functional design studies and concept development for the terminal.

2015: CAG launches the first of several packages of works to put in place the three-runway system. The works include pavement works, drainage works, security fencing and perimeter roads, mechanical and electrical works, as well as supporting works, such as major services and road diversions.

2018: CAG announces the appointment of the Master Building Consultants, comprising three teams that will provide architectural design and engineering consultancy services for the development of T5. Master Civil Consultants are also appointed; they will provide consultancy services for the design of infrastructure at the landside and airside areas outside of the T5 buildings.

2020s: Operationalisation of the three-runway system.

2030s: Completion of the initial phase of T5 and the Changi East Industrial Zone.

1. What is Changi East and why is this development project necessary?

There are strong traffic growth prospects for the Asia Pacific region, and traffic at Changi Airport is expected to grow in tandem. The airport handled over 60 million passenger movements in 2017, and experienced an average per annum growth of 5.4% over the past ten years. At an average projected 3% to 4% growth per annum in passenger traffic over the next 20 years, the handling capacity of Changi Airport will be fully utilised by the late 2020s.

The Changi East development will provide the necessary capacity for Changi Airport to ride on the growth in the region and ensure that Singapore's air hub continues to stay ahead for the country’s  long-term economic growth.

2. Why is there a need to build T5 and how will it benefit travellers?

Changi Airport's T5 is one of the key programmes under the Changi East development. Scheduled for completion in the 2030s, T5 will increase Changi’s capacity by up to 50 million passengers per annum in its initial phase. The terminal will enable Changi Airport to safely and effectively handle the projected large volumes of air traffic in the medium- to long-term.

The new facilities will enable Changi Airport to be operated as a single, integrated airport across terminals, and offer a more seamless travel experience. Building a larger terminal also allows airline groups to be housed in a single terminal instead of performing split terminal operations. Airlines can also look forward to greater partnerships and network opportunities.

3. When will Changi East be completed and how soon can we benefit from it?

Works at Changi East are progressively taking place, with different completion dates for its various programmes. The three-runway system will be among the first of the Changi East development works to be completed and it is expected to be operationalised in the mide-2020s. The three-runway system will reduce congestion in the airside, allowing for more flight movements in a safe and efficient manner.

4. How will the Changi East development be funded?

CAG will commit a substantial portion of its reserves and future surpluses, including earnings from its airport concessions, to the development.

Since July 2018, the Government has introduced a new Airport Development Levy (ADL) for passengers departing from Changi Airport to help fund the Changi East development. At the same time, the Passenger Service and Security Fee (PSSF) for all origin-destination passengers was also increased, along with revisions to the landing, parking and aerobridge (LPA) fees charged to airlines.

5. Who can I reach out to, and where can I find more information related to the Changi East development?

All media releases issued by CAG can be found in Changi Airport’s newsroom. For media related enquiries, please reach out to the Changi Corporate Communications team at corp.comms@changiairport.com.

6. Where can I find career or procurement opportunities related to the Changi East development? 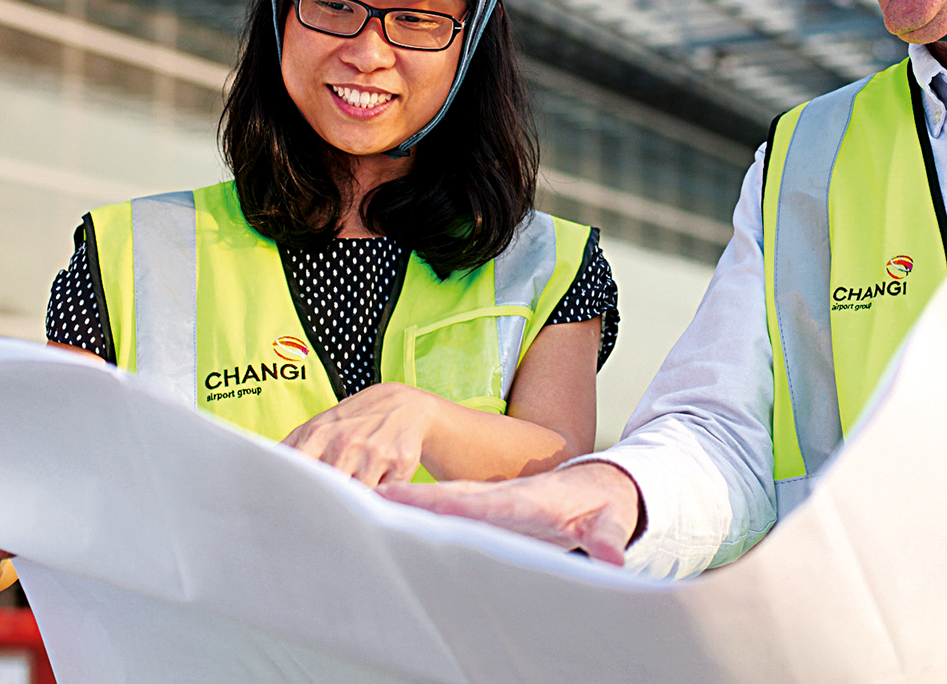